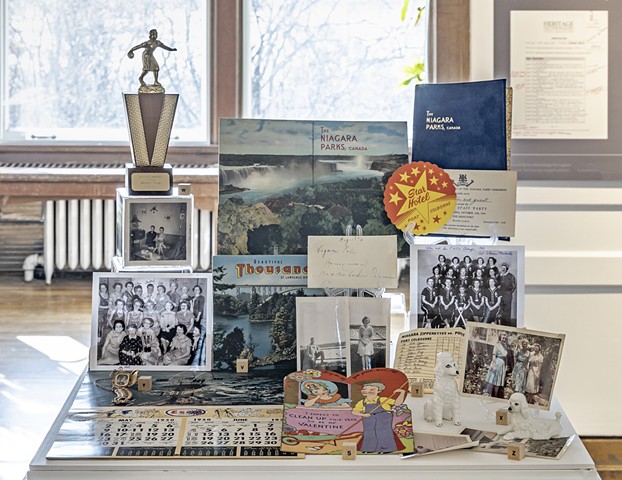 Your Niagara Dream, 1964 (MIDDLE-TOP) Lily created this collage for Helen’s retirement, covering the roads and gardens with the trees that Helen dreamed of planting.

Retirement Party Invitation and Star Hotel Coaster, 1964 (TOP-RIGHT) Helen retired from the Niagara Parks Commission (NPC) in 1964, and though she went to the dance with her possibly gay male coworker, Walter, it appears she met Lily and her female friends at the Star afterwards, a gay bar in the back of the main hotel bar.

Port Colbourne Merchanettes, PWSU Champs, Photo and Scorecard, 1949 Helen became the first female coach in Ontario in 1947. Lily served as the team manager from 1947 to 1950.

Poodles - Minnie and Grouch, 1974 Helen’s grand niece Denise with Minnie. This photo was taken the summer after Lily’s death.

Gordon and Laurie’s Honeymoon, 1946 (MIDDLE) Gordon married Laurie Hampton in Rochester, N.Y. and they honeymooned in Niagara Falls. He discovered his mother’s relationship with Helen on this trip and never spoke to Lily until 1974, when she was dying.

Valentine, 1948, which Reads: “To my love Lily. Forever yours, Helen.” Helen now refers to herself by name, rather than the Botanist. She coloured their hair grey and drew on her pocket watch locket.